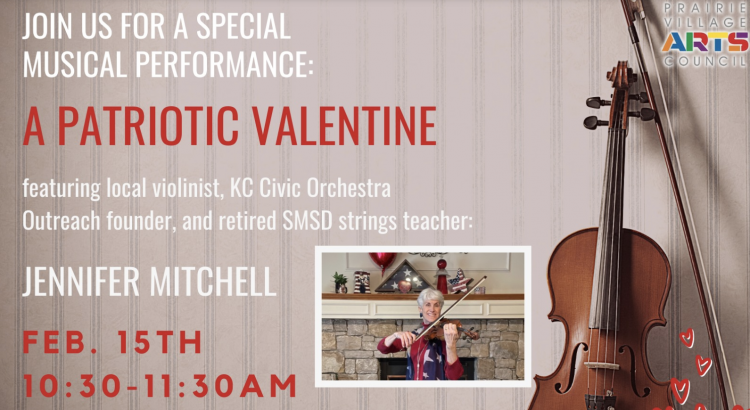 In Partnership with the Prairie Village Arts Council, KCCO Outreach coordinator Jennifer Mitchell will present a live online 50-minute program at 10:30 a.m. on February 15th in honor of Presidents’ Day and Valentine’s Day.

A familiar face to local audiences and former Shawnee Mission students, local violinist and retired SMSD strings teacher Jennifer Mitchell will perform for you on violin with accompaniment. Jennifer has performed for over 13,500 students and seniors through her musical outreach program with the Kansas City Civic Orchestra.

The coronavirus has created new opportunities for KCCO outreach. Jennifer and others from the orchestra have taken their performances to small audiences through live driveway/neighborhood concerts, outdoor performances to senior facilities, and now online through Facebook.

Program of American Favorites
America the Beautiful
Anchors Away
The Caissons Go Rolling Along
The Marine’s Hymn
You’re A Grand Old Flag
Don’t Sit Under the Apple Tree (With Anyone Else But Me)
I Only Have Eyes For You/The More I See You
Oh! Susanna
Cindy
Kiss Waltz
When She Loved Me
If I Didn’t Have You
Lover, Come Back To Me
I Can’t Help Falling in Love With You
What a Wonderful World
Over the Rainbow
Let There Be Peace on Earth 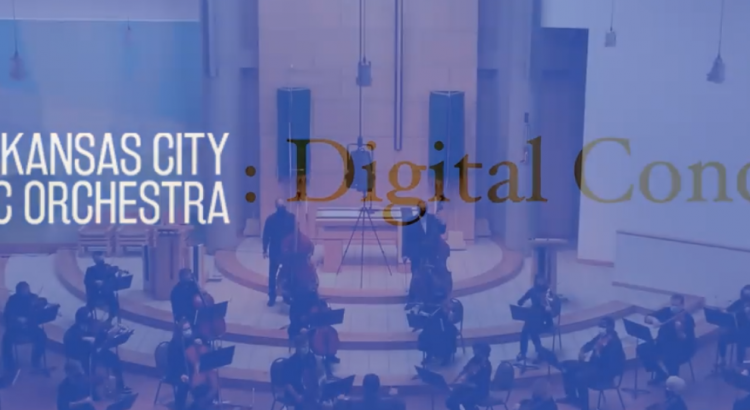 A Private Performance Just for You!

Enjoy the sounds of the Kansas City Civic Orchestra strings as they perform repertoire that is inspiring, traditional, and exciting!

Music Director Christopher Kelts and 26 KCCO strings players gathered over a period of a few weeks to rehearse and record this video for your listening and viewing pleasure. The performance features works by Mozart, Dvorak, and Tchaikovsky.

Our sincerest appreciation goes to Atonement Lutheran Church, Keith Stanfield (audio/video), and all the musicians involved in this project.

Be sure to sign up for e-mail updates. You may also donate to the Kansas City Civic Orchestra to help us continue to offer performances like these.

Please view and share this as much as you like. Together we will let music carry us through!

While we are not able to hold our annual holiday concert this year, you can still enjoy music of the season played by Kansas City Civic Orchestra members of the strings, brass, and woodwinds sections!

Original arrangements of favorite holiday tunes can be yours to enjoy in the comfort of your own home – or to share with others as a season’s greeting!  For a minimum donation of $20.20, you will receive links to download our holiday video via email between November 20 and December 31, 2020.  You may save and share the video as many times as you like. Spread some joy and make the season special with this unique video greeting! Use the button below to donate.

Thanks to some days of unseasonably nice weather this fall, our senior outreach team has been able to continue offering limited performances to senior living facilities! Although the format is different – sometimes a recording from home, sometimes on-site but at a distance – residents have still been able to enjoy some live music during this challenging time. 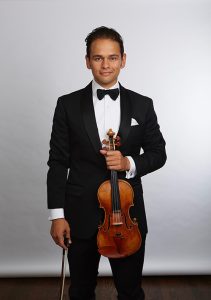 KCCO recently lost a friend and long-time supporter of the orchestra, Carl James.

Carl was born on July 3, 1928 to Glendon Otis and Martha Anna (Stone) James in Kansas City, MO. While working for the Dictaphone Company, Carl met Frances Marie Smith. They were married on November 1, 1953 at Roanoke Methodist church by Frances’ father, the Rev. J. Roy Smith. Carl is survived by his sons, David (MaryAnn), Donald (Lorinda), and his three grandchildren, Jordan, Nicolas, and Anna.

As a young man, Carl served in the US Air Force, stationed in South America. After marrying Frances, they operated their own typesetting and slide presentation business, Commercial Photocomposition, in midtown Kansas City. Carl enjoyed continually learning new technology as their industry evolved over the decades.

Carl and Frances were active members of Broadway United Methodist church. Carl was appointed leader of the Pathfinders Sunday school. It was a position which he was proud of and referred to himself as their “Benevolent Dictator”. He was also active in the OK Klub, a social group within the church, and once helped produce, with some of his lifelong friends, a comedic film as entertainment at their Christmas dinner.

When his children were young, he enjoyed family camping vacations to Rocky Mountain NP, Yellowstone, and the Grand Canyon. He also loved the time he spent with his family and friends at a small yellow house on Table Rock Lake. It was at the lake house that he started the tradition of cooking buckwheat pancake breakfasts for all the relatives and friends, and the little house became known as the YHOP, “Yellow House of Pancakes.”

Carl was a self-taught musician and had a great love of music. He and Frances attended the very first concert of the Kansas City Civic Orchestra, and later in life became involved the orchestra as a board member and ardent supporter.

Carl was very loyal and dedicated to his friends. He participated in a monthly poker game with the same group of friends for nearly 60 years. He also enjoyed competitive arguing with his mother in law’s brother, Harold. He was proud that he lived to the age of 92 so Harold couldn’t beat him at longevity. Many people will remember Carl for his nearly monthly newsletter which he called “Random Thoughts” and also his love of dark chocolate.

Carl was preceded in death by his parents, his brother Glendon, his sister Naomi, a half-brother Bill, and his wife of 63 years, Frances.

There will be a memorial service celebrating Carl’s life when we can safely gather again.

Memorial contributions may be made online or mailed to: 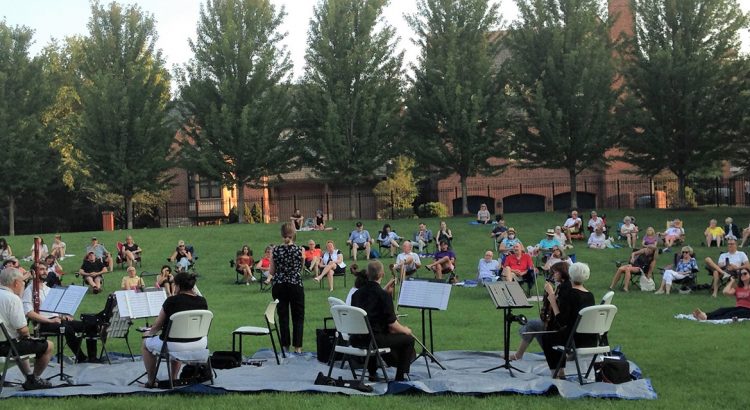 Although our regular concert was suspended due to the COVID-19 pandemic, KCCO musicians have been meeting in small groups to rehearse and perform while maintaining appropriate safety measures.  An expansion of our outreach efforts, begun by violinist Jennifer Mitchell, “Civic in the City” is a series of recitals prepared and performed in various neighborhoods around town.  Debbie Allen, principal clarinetist, began the neighborhood performances with a series of four recitals in her neighborhood during the months of June and July.  Duos, trios, and quartets were performed outdoors for appreciative, and safely socially distanced,  audience members.

A highlight of Civic in the City is the performance of an original composition for string quartet, As The River Flows, written by our own Debbie Allen.  The inspiration for the composition was watching nature unfold in all its glory, while sheltering in place, at the onset of the virus.  As The River Flows includes three movements: Life Endures, Nature Restores, and Water Glistens.

During the month of August, Civic in the City recitals have included a duo performance by Ruth Sadasivan and Jennifer Mitchell and a combined performance of string and woodwind players.  Additional neighborhood recitals are in the planning stages. If you would like to host a KCCO performance in your neighborhood, please email us and we’ll get in touch to discuss the when, where, and how!

Due to limited space, we must limit the number of attendees at these performances. If you would like to attend a performance, please email us to sign up for more specific Civic in the City updates.

Debbie Allen is principal clarinet and woodwind section leader for the Kansas City Civic Orchestra.  She is a music educator with experience teaching at all grade levels in vocal and instrumental music.  Debbie also enjoys creating original music for school bands and orchestras, both to challenge and inspire kids as well as to give back and honor the inspiration and enlightenment she has received as an educator. Her recent compositions include music for string quartet.  Music and recordings may be found at www.jwpepper.com/myscore/musictoinspire. Debbie holds degrees from the University of Nebraska-Lincoln, the University of Missouri-Kansas City, and Emporia State University. She is currently an Adjunct Faculty instructor at Baker University and spends summers working at Interlochen Center for the Arts Summer Camp.