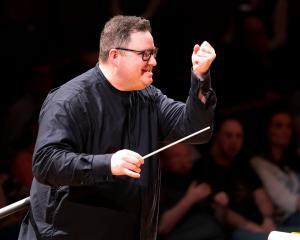 We are living in strange times, to say the least.  Never before in our nearly 63 seasons has the Civic Orchestra had to cancel part of a concert season, but with great reluctance – and a strong sense of responsibility – the Board of Directors and I have made the decision to cancel the remainder of our 2019-2020 season.  This, unfortunately, includes canceling the Saturday, April 25, 2020 concert at Helzberg Hall.

Like many orchestras around the country and the world, we are looking forward to our 2020-2021 season and are already in the exciting stages of planning the next set of concerts.  We will be offering a concert tribute to Ludwig Van Beethoven and his 250th birthday year.  We will also have two family weekend concerts: our November Pops and family concert, which will include our fabulous instrument petting zoo educational outreach program, and our Sounds of the Season performances in December, which will bring 2020 to a festive close.  We will top off our 63rd season of wonderful music with a performance at Helzberg Hall on Sunday, April 25, 2021 at 3:00pm.  This concert will feature our 2020 Carol Chatelain Young Artist as well as our 2021 winner (to be chosen).

The Kansas City Civic Orchestra’s free admission to concerts is a deeply rooted tradition, and it is only possible thanks to you, our supporters. We are always very touched by the amount of generosity you offer by giving annually, at concerts, or through sponsorships to help us meet our capital funding needs.  Just as everyone is working to meet budgets in this difficult time, the Civic Orchestra is also working to balance its remaining budget for the current season.* We thank you for your continued support and for your inspiring passion for the Civic Orchestra!

To say we are excited to get back to rehearsing together and preparing concerts, and that we are looking forward to offering high quality and inspiring concerts to the Greater Kansas City community once again, is an understatement.  With hope and excitement we look towards our 2020-2021 season.

With thanks and sincerity,

Cc: Board of Directors

* Due to the passing of the CARES Act, donors can deduct up to $300 above the Federal Standard Deduction for donations made to a non-profit organization such as the Kansas City Civic Orchestra. Click here to support KCCO today.

Due to safety measures in response to the Covid-19 virus our season finale concert will not take place as scheduled.

We truly appreciate your support during our 2019-2020 season. Please check back with us for information on our next season and some special presentations on our Facebook page. 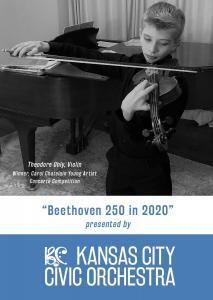 Lauded for being “positively mesmerizing at the piano” by The Times-Tribune, Korean-American pianist Minju Choi has performed throughout the United States, Canada, Europe, and Asia as a recitalist, soloist, and chamber musician. She has appeared as a soloist with the Indianapolis Symphony and Shreveport Symphony, the Northeastern Pennsylvania Philharmonic, and the Music Academy of the West and Juilliard Orchestras. Choi has been presented in recitals in cities in the U.S. and abroad, including Paris, New York City, Philadelphia, and Myra Hess Memorial Series in Chicago. She has performed solo concerts in prestigious venues such as the Lincoln Center’s David Geffen Hall, Chicago Cultural Center, Studio 54, Cosmopolitan Club of NYC, Salle Franck in Paris, and Steinway Hall. She has been heard as a soloist in live and recorded performances on radio stations around the country including WQXR New York Radio, WFMT Chicago Radio, WQSC Santa Barbara, KDAQ Shreveport, and WICR Indianapolis. Choi was a featured artist at the Vancouver Recital Society’s Chamber Music Festival, in which her performances were broadcast on the CBC Canada Radio.

A strong enthusiast of contemporary music, Choi is recognized for her championship of music by American composers. Her 2018 solo debut album Boundless under Navona Records label garnered her a feature review in the Gramophone Magazine and has been performed on radio stations across North America and Europe. It features music by Philip Lasser, Gabriela Lena Frank, and a commissioned work by Ching-chu Hu. She has commissioned a variety of works that have been written for her by American composers. Notable performances of American works have included David Diamond’s Piano Concerto with conductor Gerard Schwarz and Philip Lasser’s piano sonata “The White Owls” at Schola Cantorum in Paris, which resulted in Choi’s performance of the sonata as the centerpiece of a modern dance work presented at Lincoln Center and at Florence Gould Hall of the French Institute in New York City.  She has also worked with American composers Derek Bermel, William Bolcom, and Joel Hoffman.

Committed to the education of young pianists and arts advocacy, Choi has created numerous community music engagement programs and has given masterclasses at universities across the country. Choi has served as a piano faculty at University of Indianapolis in 2010-2017. In 2016, she also served as the Indiana Arts Commission’s Strategic Planning Committee Member.

The South Korean-born, Indiana-bred pianist has been awarded prizes in several competitions including first prize in the Nena Wideman International Piano Competition, the Music Academy of the West Concerto Competition, and the Juilliard Concerto Competition. Choi was also a winner in the National YoungArts Foundation Competition. She earned her bachelor´s and master´s degrees from The Juilliard School under the tutelage of Jerome Lowenthal. She pursued additional studies with Jean-Claude Pennetier at École Normale de Musique de Paris and with Bernd Goetzke at Hochschule für Musik, Theater, und Medien Hannover in Germany. She earned her doctoral degree at Stony Brook University in New York with Gilbert Kalish and Christina Dahl. Choi is currently serving as an Assistant Professor of Piano at Missouri State University in Springfield, Missouri. 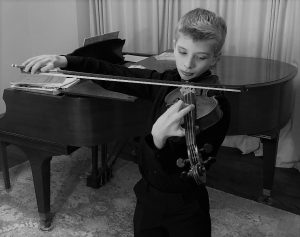 Meet Theodore “Teddy” Ohly, winner of this year’s Carol Chatelain Young Artist Concerto Competition. Teddy, 13, began studying violin at age five. He took Skype lessons with Julian Meyer, his mother’s teacher from Philadelphia, for three years. When the Ohly family moved to the Kansas City area in 2015, Teddy began studies with Noah Geller, concertmaster of the Kansas City Symphony. Currently Teddy studies with ChiaFei Lin, associate concertmaster of the Kansas City Symphony. Teddy is a member of the Ohly trio, along with his brother Oscar (cello) and sister Lucy (violin). He is concertmaster of the Youth Symphony of Kansas City Academy Orchestra. Teddy plays club soccer, runs cross country, and enjoys playing tennis. He is a student at Trailridge Middle School in Shawnee, Kansas.

Teddy will join the Kansas City Civic Orchestra during our last concert of this season at the world-renowned Helzberg Hall, Kauffman Center for the Performing Arts, on Saturday, April 25, 2020. Teddy will be performing the first movement of Lalo’s Symphonie espagnole in D minor, Op. 21. 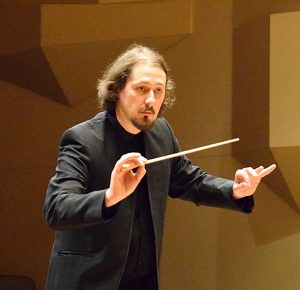 Our first concert of 2020 features guest conductor Boris Vayner. Originally from Novosibirsk, Russia, Vayner enjoys a diverse career in music as a violist, educator, and conductor.

Hear selections from Tchaikovsky’s famous Nutcracker Suite performed by the Kansas City Civic Orchestra. We are pairing this holiday tradition this year with the brilliant and toe-tapping Nutcracker Suite arrangements of Duke Ellington and Billy Strayhorn. The Kansas City Civic Orchestra is excited to welcome the Washburn University Jazz Band for this year’s Sounds of the Season concert!

Sing along to holiday favorites such as O Little Town of Bethlehem, Silent Night, Deck the Halls and Joy to the World. Included in our Friday night concert will be the winning Silent Auction bidder to lead the Civic Orchestra in Leroy Anderson’s famous Sleigh Ride!

We will also be holding our annual Silent Auction Fundraiser again this year. Stay tuned for a preview of available items.

KCCO’s annual competition for young artists, The Carol Chatelain Young Artist Competition, gives KCCO the opportunity to engage with and support young musicians in the Kansas City area. The winner of this year’s competition winner will have the opportunity to perform with the orchestra at a world-class venue – Helzberg Hall at the Kauffman Center for the Performing Arts! The winner will also receive a cash prize of $500. This year’s auditions will take place on Saturday, January 18, 2020. We invite all musicians aged 11 to 19 to participate!

Applications must be received by January 9, 2020.

Our annual Instrument Petting Zoo helps foster an appreciation for music by introducing children to different instruments and even giving them the chance to try playing them. This year’s participants also got to hear a few riffs from some of our talented orchestra members!

The Petting Zoo takes place before our November concert matinee performance. It is free and open to the public. 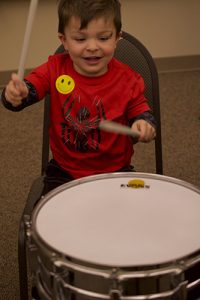 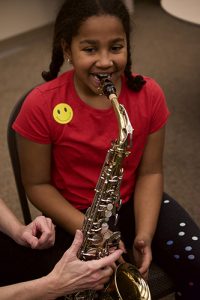 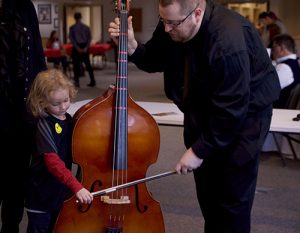 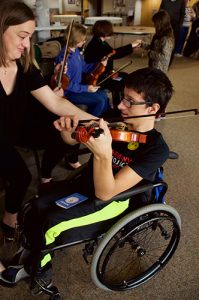 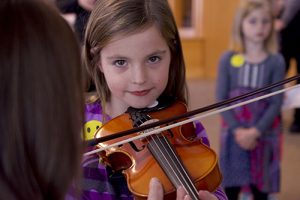 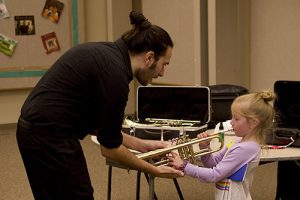 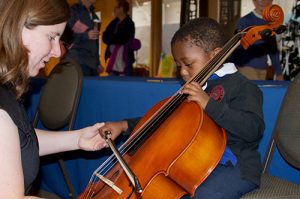 Our second concert of the 2019-2020 season features music from popular time-related movies! Our family-friendly, abbreviated performance on Saturday will be preceded by our sixth annual Instrument Petting Zoo for children – a great opportunity for budding musicians to learn about and even play different instruments with the guidance of KCCO orchestra members.

Both performances of this concert, as well as the Instrument Petting Zoo, are free and open to the public.

Back to the Future (Main Theme) – Silvestri

As Time Goes By – Hupfeld

Somewhere Over the Rainbow from The Wizard of Oz – Arlen

Highlights from Doctor Who – Gold 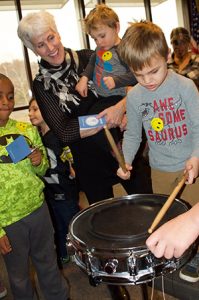 Sixth Annual Instrument Petting Zoo
Our Instrument Petting Zoo gives aspiring young musicians the opportunity to learn about different kinds of instruments and even try playing them!
The petting zoo is set up with “stations” for the different instruments. Each participant receives a KCCO passport that they can have stamped as they visit each station. It’s a fun musical journey!
In addition to the volunteer orchestra members who assist children with the instruments, KCCO also greatly appreciates the support of Band of Angels, who provides the instruments for the zoo.