This year’s Chatelain Young Artist competition drew several extremely talented musicians. For the first time ever, KCCO judges invoked the option to have both first and second place winners perform at our season finale concert at Helzberg Hall. Meet our winners! 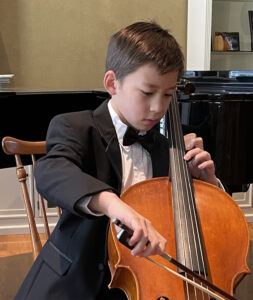 11-year old Will Savage is in fifth grade at Lakewood Elementary School in Overland Park. Will studies cello with Susie Yang and plays in the Youth Symphony of Kansas City Philharmonic Orchestra. He started studying when he was three with Sheila Kilcoyne in Washington state, after falling in love with the cello and begging to start lessons as a one-year-old. Will dreams of playing Mahler as a cellist in the New York Philharmonic and writing a symphony someday. He also enjoys basketball, ping-pong, swimming, board games, Lego, math, reading, and cheering on the Chiefs. 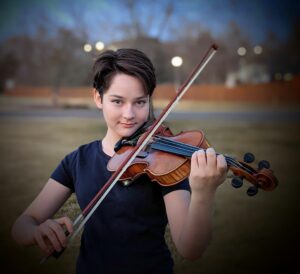 Sophia Monroe is a 15-year-old violinist from Overland Park, Kansas. Sophia began studying the violin at the age of two with Christy Paxton in Bentonville, AR. As a teenager she studied under the instruction of Rebecca Metzger-Cutler, and she currently studies with Dr. Zsolt Eder. Sophia has had the privilege of performing with the Ozark Festival Orchestra as a soloist. She was also thrilled to perform as a soloist with the Fort Smith Symphony as part of the “Earquake!” concert series. During the concert series, she was able to share her love of music and the arts as she performed for over 5,000 local children. Sophia has also been privileged to take masterclasses with various artists such as Time for Three, Elizabeth Pitcairn, and Milena Pajaro-van de Stadt. She also volunteers her time to perform at nursing homes and VA homes. In her free time, Sophia enjoys ice skating and origami.