The Kansas City Civic Orchestra was saddened to hear of the passing of our first concertmaster, Dale M. Bryan.

Dale, a violin player, served as concertmaster from 1959 – the year of our founding – through 1966. Dale was a native of Kansas City. He graduated from Wyandotte High School in 1942. One of the accomplishments of which he was most proud was being selected concertmaster of the Kansas all-state high school orchestra festival at Emporia both his junior and senior years. It was on this return drive from Emporia his senior year that Dale learned of the Japanese attack on Pearl Harbor. He served in the Navy during and after World War II.

Dale held a Bachelor of Arts degree from the University of Kansas City and a Master of Arts degree in education from UMKC. He taught in the public schools of Smithville, North Kansas City, and Park Hill High School, where he initiated the first program of stringed instrument instruction. He left Park Hill to join the music faculty at what was then Park College. In addition to serving as KCCO’s first concert master Dale was also the original concert master of the Northland Symphony. In later years he was employed in various capacities at the Kansas City Public library. Following his retirement he spent his time in private teaching, taking care of his house and grounds, and volunteering at St. Luke’s Northland Hospital. 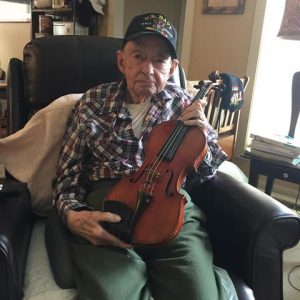 Dale continued to play his violin until the last few years of his life. The photo at left was taken within the last few months and shows Dale with his violin – the same one he played during his time with KCCO.

Our thoughts are with Dale’s family as we mourn the loss of our fellow music lover and key figure in KCCO’s history.

You can read Dale’s complete obituary here. KCCO is grateful to David McLane Bryan, Dale’s son, for providing the recent photo of Dale and for informing us of his passing.