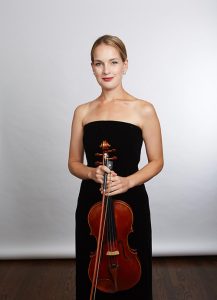 Ashley Stanfield is a featured artist for KCCO’s season opening concert on September 28, 2019. A former and founding member of the Hampden String Quartet, with whom she won the Sir john Barbirolli Prize for Chamber Music at the Royal Academy of Music, Ashley is a founding member and violist of the Opus 76 Quartet.

Ashley performs regularly with the Kansas City and Des Moines Symphonies. She also serves as Principal Violist of the Kinnor Philharmonic and plays in the Saint Joseph Symphony. She has appeared as a guest artist with the Bach Aria Soloists, Spire Ensemble and the KC Baroque Consortium. In 2019, Ashley will appear as a soloist with the Kansas City Civic Orchestra, playing Mozart’s “Sinfonia Concertante”.

Outside of classical music, Ashley has enjoyed performing with several rock/pop bands including Michael Buble, Belle and Sebastian, Hanson and Johnny Mathis.

A native of Kansas City, Ashley Stanfield has been teaching and performing locally for over ten years. She is an Alumni of both the Interlochen and Idyllwild Arts Academies and holds a Bachelors Degree in Viola performance as well as a Teaching Licentiate from the Royal Academy of Music, London, where she was a student of London Symphony Orchestra Principal Violist, Paul Silverthorne. Other teachers include  Miami String Quartet violist, Scott Lee and Christine Grossman, former Principal Violist of the Kansas City Symphony.

As a part of her studies at the Academy, Ashley also worked with many prominent conductors including Trevor Pinnock, Leif Segerstam, Yan Pascal Tortelier, Tadaaki Otaka, and Sir Colin Davis, with whom she recorded Mozart’s Marriage of Figaro and Beethoven’s Symphony No.9. With the U.K. based Hampden String Quartet, she performed regularly at the Oxford Proms and the Prom’s at St. Jude’s concert series.

Ashley enjoys teaching and has extensive  experience at the beginner through to collegiate level. She currently teaches group violin (elementary level) in the Kansas City Missouri School district via the KC Harmony Project program and formerly served as a teaching artist on the faculty at Drake University. Many of her private students are members of the Kansas City Youth Symphony and the Kansas All-State and District Orchestras. She lives in Prairie village with her husband and son and their faithful Labrador, Miley.